Natural toxins are toxic chemicals produced by living organisms and are present in many areas across the globe where humans, pets, livestock, and wildlife live. For example, there are natural toxins in some wild mushrooms, which are highly toxic upon ingestion, and in snake venom. The hazards posed by these and some other toxins are widely understood to cause serious illness or death to humans and other organisms upon exposure if the toxin is present in a high enough dose. Fortunately, even though these and other toxins commonly exist in the environment, most humans are never exposed and therefore the overall human-health risk is generally low in our everyday lives. U.S. Geological Survey (USGS) science helps understand the transport, fate, exposure pathways, and health effects of a variety of environmental toxins for which much less information is available.

Algal toxins—including cyanotoxins—are another group of natural toxins that have captured public attention owing to reported hazards associated with exposure. A public perception persists that all algal blooms are toxic and represent human-health risks; however, the actual risks to humans, pets, livestock, and wildlife from sublethal doses of cyanotoxins associated with algal bloom exposure are not currently (2018) well understood. Consequently, resource managers and public health officials understandably apply precautionary approaches and limit access to water resources when algal blooms are present even in the absence of toxin occurrence or quantifiable health risk. Limiting access can result in economic challenges.

Every year access to water for recreation and drinking is limited or prohibited owing to the presence of algal blooms—often called “harmful algal blooms” (HABs). For example, the discovery in 2014 that the city of Toledo, Ohio, water supply was contaminated by algal toxins resulted in a “do not drink advisory” for nearly 3 days and drew national attention to the potential vulnerabilities of our water resources to toxins. Likewise, in Florida, State of Emergency declarations were made in 2016 and 2018 owing to algal blooms in Lake Okeechobee waterway, and “red tides” (dinoflagellate blooms) in the ocean along Florida’s Gulf Coast resulted in beach closings.

In May 2018, at least 15 states had recreational closures or health advisories associated with cyanotoxins in lakes and rivers (D’Anglada, 2018).

Scientists supported by integrated programs and mission areas of the USGS are working in collaboration with our stakeholders to answer the following questions:

During fiscal year 2018, Congress increased the Toxic Substances Hydrology Program’s budget to enhance the capabilities of our Algal Toxins Laboratory in Lawrence, Kansas, and substantially increase the scope of our work on algal toxin science needed to safeguard human and animal health.

What are Algal Toxins?

A variety of natural toxins, including anatoxins, brevotoxins, cylindrospermopsins, dermatoxins, microcystins, nodularins, and saxitoxins, can be synthesized by algae and bacteria in freshwater and saline waters. Some species are known to produce multiple toxins. For example, Dolichospermum circinale, the cyanobacteria pictured at left has the potential to produce saxitoxin, microcystin, and anatoxin-a. Interestingly, algal species that have the potential to produce currently known toxins do not always produce them, and the environmental conditions that stimulate toxin production are not well understood. Exposure to algal toxins can be through inhalation, dermal contact, or ingestion. Adverse health effects from toxins may not be immediately noticeable and may depend on the type of toxin and its concentration, route and duration of exposure, and the type, size, and preexisting health status of the human or animal exposed to it. For example, human-health effects from exposure to cyanotoxins while swimming may differ from those related to consuming fish—and even the way the fish is cooked may affect exposure.

The U.S. Geological Survey and their partners measured cyanotoxins in lake, river, wetland, and coastal sites throughout the Nation (shown in green) during the 1990s to 2016 in a series of studies.
Algal toxins exist in a variety of water resources across the United States. For nearly two decades, the USGS has worked collaboratively with numerous partners to develop field and laboratory methods that help us understand when and where cyanobacterial blooms and cyanotoxins flourish. USGS research has shown that cyanotoxins are common throughout the United States, from our smallest streams to our coastal waterways. For example, in 2007 the USGS partnered with the U.S. Environmental Protection Agency in the first ever National Lakes Assessment to determine the occurrence of cyanotoxins in lakes and reservoirs. Similarly, in 2014, the USGS completed a systematic regional survey of cyanotoxins in streams of the southeastern United States. Results from these two studies indicated that cyanotoxins were present in a variety of environments.

In situ sensors for continuously monitoring algal blooms and other water conditions.

The USGS Environmental Health Toxins Team is developing and utilizing leading technology to better understand algal bloom and algal toxin occurrence for early warning of potentially harmful events. This technology includes the latest laboratory techniques, in situ sensors with continuous monitoring capabilities, and satellite data. The Cyanobacteria Assessment Network (CyAN) project is an example of our team’s collaboration with scientists from the U.S. Environmental Protection Agency (EPA), National Aeronautics and Space Administration (NASA), and National Oceanic and Atmospheric Administration (NOAA), and collaboration with State, tribal, and Federal stakeholders. Although the cyanotoxins associated with cyanobacterial blooms cannot yet be measured from space, we can measure the pigments associated with cyanobacterial blooms and have tested an approach to assess their frequency and extent in California, Florida, and Ohio. Scientists determined that cyanobacterial bloom occurrence could be reliably estimated in these test locations, indicating that this approach may be applicable across the Nation, particularly as new satellites and remote sensing capabilities become available.

The USGS Environmental Health Toxins Team used multiple lines of evidence to understand the large algal bloom that developed in Lake Okeechobee in 2016, which lasted almost 3 months and resulted in the Florida Governor declaring a state of emergency.

The team, in collaboration with academic researchers, used well established scientific methods along with metagenomics, a state-of-the-art technique, which examines the genetic material in samples. The team identified algae; measured toxins; and measured water constituents such as chlorophyll, nutrients, and salinity. The combination of these techniques helped them identify the presence of the genes and the organisms associated with the production of microcystin, a potent liver toxin, and saxitoxin, a potent neurotoxin. This combined approach is leading the team one step closer to understanding what environmental factors cause algae to produce toxins.

Understanding Drivers of Cyanotoxin Production in the Lake Okeechobee Waterway

The USGS and other researchers combined field (2016) and laboratory (2017) studies to understand the factors that drive cyanobacterial bloom development and associated cyanotoxin production in Lake Okeechobee, the St. Lucie River and Estuary, and the Indian River Lagoon in response to the large-scale Lake Okeechobee cyanobacteria bloom in 2016. 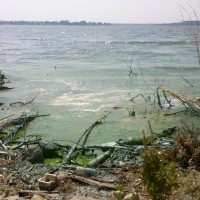 This study provides a method for quantifying changes in the spatial extent of cyanobacterial blooms at local and regional scales using remotely sensed data to determine if bloom occurrence and size are increasing or decreasing for inland water resources.

This study explores the utility and limitations of currently available remotely sensed satellite data for identifying the frequency of algal blooms in the Nation's lakes and reservoirs. This information provides a first step toward the goal of understanding exposure risk to protect the health of humans, pets, livestock, and wildlife.

This report provides photographic documentation and identification of the cyanobacteria present in Lake Okeechobee, the Caloosahatchee River, and St. Lucie Canal during an extensive algal bloom in 2016.

The amino acid β-methylamino-L-alanine (BMAA) is produced by cyanobacteria and has been suggested by human health researchers as a causal factor for degenerative neurological diseases such as Amyotrophic Lateral Sclerosis (ALS), Parkinsonism, and dementia. An objective review concluded that this hypothesis is not supported by existing data.

Understanding Associations between Mussel Productivity and Cyanotoxins in Lake Erie

Study findings indicated that cyanobacteria and cyanotoxins were not associated with mussel mortality at the concentrations present in Lake Erie during a recent study (2013–15), but that mussel growth was less at sites with greater concentrations of microcystin.

USGS scientists identified water-quality and environmental factors related to cyanobacterial harmful algal blooms at beaches in Ohio. This information was collected as part of a long-term plan to develop site-specific predictive models for microcystin concentrations.

To assist Native American and Alaska Native communities, USGS scientists developed a guide to evaluate algal blooms for the presence of cyanobacteria that are known to produce a variety of toxins.

This study provides new evidence of the widespread occurrence of cyanotoxins in lakes and reservoirs of the United States and offers new insights into measures used for assessing potential recreational health risks.

USGS scientists detected microcystin—an algal toxin—in 39 percent of 75 streams assessed in the southeastern United States. These results will inform and become part of a larger, systematic national survey of algal toxins in small streams of the United States.

Four Federal agencies, including the USGS, are collaborating to transform satellite data into information managers can use to protect ecological and human health from freshwater contaminated by harmful algal blooms.

The GeoHEALTH–USGS newsletter has been published 2 to 4 times per year since 2006, and provides a publicly accessible summary of USGS science activities pertinent to the health of fish, wildlife, domestic animals, and humans.

PRIVACY STATEMENT regarding Newsletter email signup formThis form is subject to the Privacy Act of 1974, as it relates to privacy policies of the U.S. Geological Survey (USGS), a bureau of the U.S. Department of the Interior (DOI). A full description of USGS privacy policies are available online.

Authority: Email or Web Forms - When you send us Personal Identifiable Information (PII) by contacting us via email or by filling out a form that emails us this information, we use it to respond to your requests or add you to our mailing list. See USGS Privacy link above.

Purpose: The USGS purpose for collecting email information is to be added to a USGS GeoHealth Newsletter subscribers list manager. PII as defined by the Office of Management and Budget (OMB) may be minimally collected by USGS to accomplish a purpose required by statute, regulation or executive order.

Routine Uses: When you add an email to a distribution list or create an email with an email management service, we have access to the data on our list and the information of your email address. The USGS and DOI utilize some third-party websites and applications that are not exclusively operated or controlled by the government. DOI may share information with private organizations as part of a service that provides DOI users with increased capabilities or functionality on the site. We do not retain or distribute lists of email addresses to any parties outside the USGS, except as necessary to conduct official U.S. Government business, and we do not distribute lists of email addresses to non-Government entities.

Disclosure is Voluntary: If the individual does not furnish the information requested, there will be no adverse consequences. However, failure to furnish information (email address) asked for on the USGS GeoHealth Newsletter sign up form may delay or cancel distribution of the newsletter.

All photos are from U.S. Geological Survey unless otherwise noted.