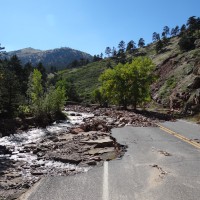 U.S. Geological Survey (USGS) scientists are focusing on new efforts to help protect human and environmental health during disasters. Two papers published recently summarize important characteristics of materials released into the environment by natural and anthropogenic disasters, such as volcanic ash, building collapse dusts and debris, flood sediments, flood waters, wildfire ash and debris, mine tailings, and mineral processing solutions. These papers are based in part on the scientists' own environmental disaster response work spanning ... 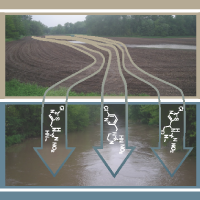 Three neonicotinoid insecticides (clothianidin, thiamethoxam and imidacloprid) were detected commonly throughout the growing season in water samples collected from nine Midwestern stream sites during the 2013 growing season according to a team of USGS scientists. Clothianidin was detected most frequently (75 percent) and at the highest maximum concentration (257 nanograms per liter [ng/L]); thiamethoxam and imidacloprid followed with decreasing frequency of detection (47, and 23 percent) and ... 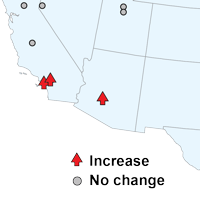 USGS scientists have completed the most comprehensive evaluation to date (2014) of decadal-scale changes in pesticide concentrations in groundwater of the United States. Such assessments are essential for tracking long-term responses to changes in pesticide use and land-management practices.

Groundwater samples were analyzed for ... 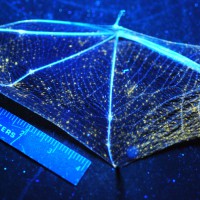 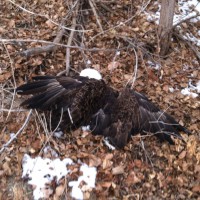 Scientists from the USGS diagnosed West Nile Virus (WNV) in numerous eared grebes and bald eagles that died in a 2013 mortality event in the Great Salt Lake. Diagnoses were based on findings during pathological analysis to determine cause of death, including molecular detection of WNV genetic material in tissues, and isolation of WNV from multiple tissues from each bird. There was no evidence of the presence of other infectious diseases. West Nile Virus is carried by mosquitos and infects humans, domestic animals, and wildlife. In wildlife ... 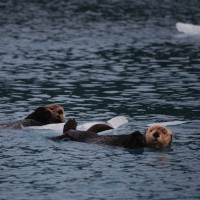 USGS scientists, in collaboration with the Centers for Disease Control and Prevention, have discovered evidence of the same influenza virus (H1N1) in sea otters living off the coast of Washington State that caused the 2009 "swine flu" pandemic in humans. During a sea otter health monitoring project conducted in 2011, researchers discovered antibodies for the pandemic 2009 H1N1 flu virus in blood from 70 percent of 51 otters sampled. None of the otters were ... 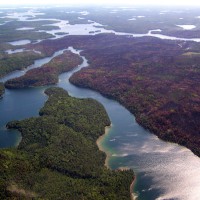 Complex Response to Decline in Atmospheric Deposition of Mercury

USGS scientists found that mercury concentrations in shallow waters and methylmercury (MeHg) concentrations in fish in four lakes in Voyageurs National Park, Minnesota, were not consistent with decreases in the wet atmospheric deposition of Hg recorded at nearby monitoring stations for over a decade. Methylmercury is a toxic form of mercury (Hg) that accumulates and biomagnifies in aquatic food webs. Some of the Hg entering aquatic ecosystems is converted to MeHg. Among other things, sulfate levels have been related to ... 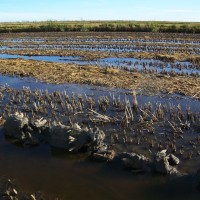 USGS scientists found that management practices relating to water drawdown and re-flooding in agricultural wetlands used for rice production contributed to higher methylmercury concentrations in sediment than was found in nonagricultural wetlands that were permanently or seasonally flooded.

Seasonal and spatial controls on methylmercury production were ... USGS scientists measured lead in blood from tundra swans that nest in Alaska and then followed the migration of these birds using satellite telemetry. Levels of lead in blood were higher in adults than young swans, suggesting exposure to lead occurs on wintering areas and/or during migration, rather than on the summer breeding grounds in Alaska. The lowest blood levels were found in swans that rarely migrate from their nesting grounds in southern Alaska. The highest levels of lead were ... 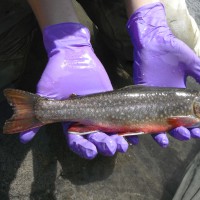 Mercury in Fish from 21 National Parks in the West

USGS and National Park Service (NPS) scientists collaborated in the first study to measure mercury in fish from remote places in 21 National Parks spanning 10 Western States, including Alaska. Mercury levels in fish generally were low, but were elevated in some local areas, including two parks in Utah and Alaska where samples taken from sport fish exceeded the U.S. Environmental Protection Agency's human health criterion. Results of sample analyses indicate that mercury in the aquatic ecosystems of ... A study by scientists from the U.S. Geological Survey (USGS) and Colorado State University-Pueblo shows that some chemicals in biosolids that are applied to nonirrigated farmland are sufficiently persistent and mobile to move into the soil beneath farm fields. Biosolids are the treated solid-waste component of wastewater treatment plant effluent; about 50 percent of the biosolids produced in the United States are applied to land as a fertilizer.

The field-scale study was ... 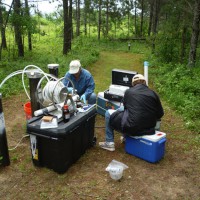 Research at a 1979 crude oil spill from a ruptured pipeline has exposed and helped to overcome many challenges facing an effective, cost-efficient cleanup of crude oil, USGS scientists have found. The environmental release of crude oil occurred near Bemidji, Minnesota.

Although natural microbial activity has been degrading the plume of oil contaminants dissolved in groundwater, the crude oil trapped in the aquifer has ... Scientists from the USGS contributed to a publication that reports the complete gene sequence of a novel picornavirus isolated from minnows and baitfish in several areas of the United States. The scientists used the molecular sequence and characterization of this virus to determine the evolutionary (phylogenetic) placement in the "family tree" of known fish viruses. The scientists then applied epidemiological analysis to show ... 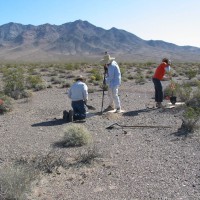 High Levels of Natural Perchlorate in a Desert Ecosystem

Naturally formed perchlorate falls from the atmosphere and accumulates in the soil of a Nevada desert at rates several times greater than previously thought, according to research by USGS and Texas Tech University scientists published in the Journal of Environmental Quality. The study is the first to document how natural perchlorate is delivered from the atmosphere to the soil and then cycled between soil and plants in a terrestrial ecosystem. Perchlorate has emerged as an environmental contaminant of concern in ... 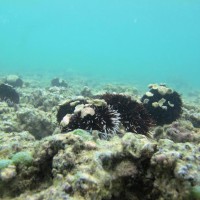 Scientists from the USGS, University of Hawaii, the State of Hawaii Division of Aquatic Resources, and The Nature Conservancy are investigating unusual mortality of collector urchins (Tripneustes gratilla) that has been ongoing since February 2014. As grazers, urchins play a critical role in preventing overgrowth of algae on tropical coral reefs. Awareness of the linkage between urchins and coral health became apparent in the early 1980s when ... Conserving nature can improve human lives. From forest watersheds that perform natural filtration of drinking water to coral reefs that break tsunami waves before they flatten seaside villages, intact ecosystems provide innumerable services to human society. Might biodiversity be healthy for the ecosystem and also protect people against infectious diseases? While most disease ecologists would say yes, a new study published in Ecology presents data suggesting that the balance between biodiversity and infectious disease is ... 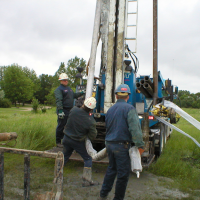 USGS and Minnesota Department of Health scientists are assessing the distribution of arsenic in groundwater in Minnesota. Naturally occurring arsenic is common in groundwater in Minnesota. About 15 percent of drinking water wells statewide have arsenic concentrations that exceed the Environmental Protection Agency drinking water standard of 10 micrograms per liter. In a few Minnesota counties, more than one-third of newly drilled wells exceed this EPA standard. 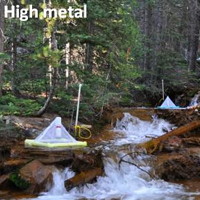 Studies conducted in subalpine streams in Colorado by USGS scientists found that aqueous metals resulting from acid mine drainage and natural weathering can almost eliminate adult insect emergence from streams, even at metal levels too low to reduce aquatic larval densities. This pattern suggests that adult insects might be a more sensitive indicator of metals than juvenile (larval) insects and that adults are not as protected from aquatic contaminants as ... A team of scientists from the USGS and the Agroscope Reckenholz-Tanikon Research Station, Switzerland, found that some mycotoxins are common in U. S. stream waters. Mycotoxins are toxic compounds produced by molds (fungi) that can cause disease and even death in humans and animals. Mycotoxins can grow on a wide variety of crops. 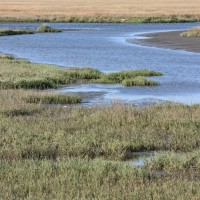 Nutrient Inputs to the Nation's Estuaries and Great Lakes

Maps and data tables that describe nutrient loading to major estuaries throughout the conterminous United States are now available online. These maps show the major sources of nutrients and their contributing areas for 115 estuaries along the Atlantic coast, Gulf of Mexico, and Pacific Northwest coast and from 160 watersheds draining into the Great Lakes. Information on the sources and areas within a watershed that contribute nutrients to the Nation's estuaries can be ... 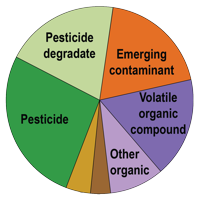 PRIVACY STATEMENT regarding Newsletter email signup formThis form is subject to the Privacy Act of 1974, as it relates to privacy policies of the U.S. Geological Survey (USGS), a bureau of the U.S. Department of the Interior (DOI). A full description of USGS privacy policies are available online.

Authority: Email or Web Forms - When you send us Personal Identifiable Information (PII) by contacting us via email or by filling out a form that emails us this information, we use it to respond to your requests or add you to our mailing list. See USGS Privacy link above.

Purpose: The USGS purpose for collecting email information is to be added to a USGS GeoHealth Newsletter subscribers list manager. PII as defined by the Office of Management and Budget (OMB) may be minimally collected by USGS to accomplish a purpose required by statute, regulation or executive order.

Routine Uses: When you add an email to a distribution list or create an email with an email management service, we have access to the data on our list and the information of your email address. The USGS and DOI utilize some third-party websites and applications that are not exclusively operated or controlled by the government. DOI may share information with private organizations as part of a service that provides DOI users with increased capabilities or functionality on the site. We do not retain or distribute lists of email addresses to any parties outside the USGS, except as necessary to conduct official U.S. Government business, and we do not distribute lists of email addresses to non-Government entities.

Disclosure is Voluntary: If the individual does not furnish the information requested, there will be no adverse consequences. However, failure to furnish information (email address) asked for on the USGS GeoHealth Newsletter sign up form may delay or cancel distribution of the newsletter.

The page contains links to .pdf files, which can be viewed with Adobe Reader®.
You can download Adobe Reader® for free.